Unfortunately Sola Bingo is now closed, but there's no need to worry! Check out hundreds of alternative bingo sites at New-OnlineBingoSites.co.uk!

Simplicity is an aspect of design that’s rarely seen within the iGaming circuit, with brands choosing instead to put their faith in fancy novelty and gimmicks. That often works for emerging labels, but when it comes to withstanding the tests of time, it takes more than quirks to last as long as Sola Bingo has. Established in 2014 by the Cozy Games company, this website has been a bright, sunny yet clean haven for those looking to experience a wide array of activities, primarily that of bingo. Seeing as how most of you won’t have heard of this label, we’ve taken the time to find out some of its background information. What we found reveals that Sola Bingo is part of the Live Bingo Network, a company that has numerous brands under the umbrella of its name.

One of the first areas of Sola Bingo we’d like to point you in the direction of is the promotions, as they provide customers with various avenues of bonuses to explore, while always championing bingo based activities. Of course, you’ll already know this if you’ve been a follower of Cozy Games and the many websites they’ve released of a similar nature over the years.

As you’ll be able to see for yourselves, Sola Bingo offers a first deposit bonus worth 300% when you allocate a sum of money valued at £10 or more. If you’d like, you can leave it here and reap the benefits of this reward, or you can make two more deposits for a decreasing value of 150% and then 100%. Once again, the amount needed is no larger than £10. What is more, when it comes to banking any winnings from this deal, players need to overcome the x4 wagering requirement of this deal, the figure that is the same for all of the available bingo bonuses.

We could at this point guide you in the direction of another welcome package, once again meant for the Bingo Lobby, however we reckon that you’ll be wanting to know what awaits you after you’ve become a regular gamer. After all, that’s when everything heats up, with hump day treats and bingo room prizes that are sure to get you through the working week and beyond. Basically, it’s unlikely that you’re going to be bored when a member of Sola Bingo. That being said, if the promos do become boring, you can always dedicate your time to collecting loyalty points.

These points come from spending money via the games, a tactic that many other online brands utilise throughout the industry. Despite there being similarities between Sola Bingo and other labels, this brand provides an easy to access loyalty system seeing as how all users become part of the scheme after registration. These points can be redeemed for money, with that money then being used to play the games, it’s a satisfying cycle.

Given the fact that this label is a part of the Cozy Games community, it’s natural to ready yourself for an ample selection of their games being present in this website. However, what you may not have expected is that there’s also titles from Eyecon and NetEnt; these two developers are like the finishing touches to Cozy Games bingo websites, so you likely have seen the three all placed together before.

When inside the Bingo Lobby, there’ll only be the various forms of the game rather than the full selection of the site’s games; there’ll be opportunities to play 90, 80, 30 and 75 ball bingo, inside rooms with names like City Hall, Penny Bingo, Down Town, and others. However, while there’s different setups for the activities, the main form is that of 90 ball bingo. Please note that there’s some rooms that won’t be accessible to all gamers, such as the Newbie Room, which is only available to newly registered users. Even though that’s the case, whichever room you join will ask for a ticket, of which you can buy prior to a game starting.

In reference to the pokies, as well as the few other table games there, they’ve been separated into categories that reference specific characteristics, such as the jackpot amount and/or if they’re new games. What’s worth knowing though, is that none of these titles are free to play, and so you’ll need to use real money in order to enjoy the reels and their winlines.

Before you attempt to make a deposit, you need to be aware that you can’t deposit £5 as a minimum amount, even though the FAQs references that amount. We’re not sure why the site has given false information, but we know from experience that the minimum amount you can allocate is £10. As for withdrawals, well there’s no mention of minimum sums of money, however we do know that the rollover necessity needs to be met before a withdrawal is put through.

Another aspect that could stop a transaction going through is by not using one of the permitted payment methods; Sola Bingo enables payment through Visa, PayPal, and Skrill, as well as a few others. These providers are mostly banked in EUR, though they also allow GBP as well, a trait of the brand that’s typical of most online bingo websites. Alongside the limited allowed currencies, we advise that customers are aware that their chosen money provider can apply fees if they see fit.

Since the Gambling Act of 2005, all online websites have needed to have licensing in order to operate, with Sola Bingo following that rule by having a dual license from the UK Gambling Commission and the Government of Gibraltar.

In addition to the security of the label, Sola Bingo has an exceptional setup when it comes to customer service, with four main ports of contact to be found via the Contact Us page. Players can speak to the team on the phone, through email, via a live chat conversation, and by taking out a ticket from the Sola Bingo onsite system. Each one of these support options are open 24 hours a day, thus enabling all types of gamers, even those of you who are night owls, can game knowing that help is at hand.

We had assumed that this website linked to a form of social media, be it Facebook, Twitter or even Google+, but when we searched the various pages of the site, we found no mention of any such accounts. Seeing as how social media has been popular for many years, it seems odd that a 2014 released site doesn’t connect to a social media page or several… 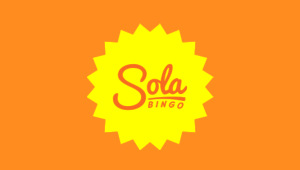