How do you know of the gravy train? Some will know about that phrase being linked to money, while others will know the phrase as a band from the late 1960s. However, some of you will know of the Gravy Train as a bingo site that was released in 2014, in partnership with Cozy Games and as part of the Live Bingo Network. Such details may not seem important, but each inclusion of prestigious brands ensures that customers get a more quality experience. Quality certainly appears to be on the cards, if we take a look at the aesthetics and layout of the interface; due to being released four years ago, the site may not be the freshest, but it looks good and functions well. This can be said as true of all of Cozy Games platforms, although they have made more individual looking themes previously.

To start off our review properly, we’re going to take a closer look at the promotions, seeing as how they’re an integral part of the iGaming experience – when a platform doesn’t offer bonuses, it can damage their success with customers. But we digress. In the case of Gravy Train Bingo, there’s a couple of options for new users, one of which is the deposit bonus, an offering that can be stretched out for your first three deposits, all when a £10 allocation or more is made. The amount of bonus monies you’ll receive changes with each of the allocations: deposit bonuses start at 300%, followed by a bonus of 150%, then 100%, with a x4 wagering requirement.

Of course this offer can be used with the free bingo tickets deals, worth up to £3K, for the first seven days of when your account was opened. This too comes with a wagering requirement of x4, which can be found within the terms and conditions. As fun as it is to be a newbie, there’s much more depth from the remaining deals offered, such as Penny Bingo, where the tickets are 1p and there’s fixed jackpots of £5 up until 11pm. There’s also other room based activities, such as the BOGOF offer, which is great way of doubling up your chances of winning. Not that these are the only options available to you, as there’s also Bonus Bucks, as well as a loyalty scheme.

Bonus Bucks are given to customers for their loyalty, but they’re not part of the main loyalty scheme; BBs are a form of Gravy Train monies which can be used instead of your actual money. Games that accept BBs will have an icon to say as much. However, the loyalty system is based upon users collecting points as they play through the games, as long as they play with real money. Once you’ve obtained at least 100 LPs, they can be redeemed for cash, though please note that the value of a single point is only 1p. As you can see, while the points are a more regular means of being rewarded, they’re not high in value.

Should you have played with Cozy Games before, you’ll know the types of rooms that’ll be available, as well as their costs. An example of this is Big Ben, a bingo room that delivers 90 ball bingo; most of the time this room is open to users across all Cozy Games bingo brands. Two other rooms that are also available, more often than not, is that of Penny Bingo, which delivers 75 ball titles, alongside Down Town, a room which caters to the 80 ball bingo crowd.

These rooms have prebuy tickets, as well as allowing you to choose to play immediately, with all users gaming alongside numerous other members. Some rooms even allow up to 400 or more gamers at any one time. Moreover, the price of the tickets for these games tend to be below £1 each, with the cheapest being capped at 1p, thus gifting us with an affordable means of gaming.

In addition to the Cozy Games developed titles, there’s also Eyecon and NetEnt one armed bandits, alongside table top games and other such activities. Given the fact that Gravy Train Bingo is primarily for bingo fans, it’s impressive that there’s such a range of diversity offered by the alternative games section. Nevertheless, while a positive, there’s no escaping the truth of the matter, which is that this label doesn’t offer the volume of titles that a regular online casino would.

The FAQs is where you’ll be able to find the banking information when not a member of the site; once there, you’ll be able to see that the selection of methods is small but filled with commonly utilised payment options. Processed in GBP and EUR, Visa, PayPal and Ukash are just three of the several options that can be used when you’re making a deposit and/or withdrawal.

Speaking of withdrawals, they can’t be put through until wagering requirements have been completed, with a progress bar displaying how far along you are to managing this feat; to find this information, you’ll need to visit your account. As you can see, everything has been designed to be as user friendly as possible, with withdrawals even able to be cancelled via a flowback process. Of course, if you decide to proceed with your withdrawals, they’ll take no more than three business days to be finalised.

Seeing as Gravy Train Bingo is an official iGaming website, it makes sense that there’s licensing attached to its services; in this instance, there’s one from the Government of Gibraltar and the UK Gambling Commission.

If you need assistance, which is likely to happen at some point during your membership, the Contact Us page is where it’s all at. This is assuming that you don’t want to investigate the FAQs, a part of the support system that can prove useful for smaller enquiries and any questions that you may have. Nonetheless, when it comes to big issues, the team are available 24/7 via live chat, phone, email and an onsite ticket setup.

One of the first elements of an iGaming site we tend to look out for, in addition to everything we’ve mentioned thus far, is social media branding. Gravy Train Bingo may be a label that’s been around for four years, and yet it doesn’t seem to have any channels available to its followers and users. Sadly, Cozy Games follows this pattern all too often, which is problematic for those of you looking to experience the social side of the iGaming community. 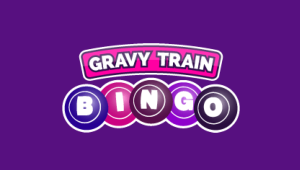