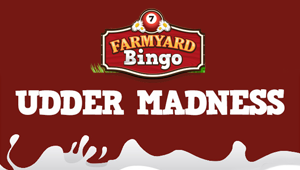 Life on the farm is always relaxed when you play online at Farmyard Bingo. Operated by the same company who fronts Angry Bingo, you can rest easy knowing Cassava Enterprises knows exactly what you need in order to have a good time. One way that they’re keeping the energy up this month is with the special bonus Udder Madness.

If bad puns aren’t your thing, perhaps the goodies you can potentially win when opting into this bonus will be…? Similar in style to Angry Bingo’s Bonkers promotion, this bonus is playable throughout the day, every single day of the week. Being able to savour the rewards day in day out is a fantastic way of keeping morale up for all paying members, especially during the darker months of the year.

Despite its similarities to Bonkers, Udder Madness has a few contrasting terms and conditions, most notably being the house you can play. The promotional games start every two hours from 10:15am until 6:15pm, which is when the games start to play every hour instead, up until 11:15pm that evening. The time in between games may have increased with Udder Madness, but the stellar 75 ball variations on offer soon make up for that. What is more, you gain access to ever changing prizes whenever you buy into one of the activities.

Visit Farmyard Bingo
In regards to purchasing bingo tickets, as many as 96 can be purchased at any one time, provided the cost of said ticket(s) is above 0p. If the Udder Madness game is offering a free round of bingo, the highest number of tickets you can buy is just six. Granted, that’s a dramatic difference, but the cost you pay reflects the chances you get, the likelihood of winning, etc, and so the contrast in price and availability seem more than fair.

Due to the nature of bingo, sometimes multiple winners come forward during one game – this is why Udder Madness splits the prize between all winners. We can’t tell you what prizes will be won when, but we can confirm that they’ll be credited into your account the moment the game ends. To give you an idea of what you can win, there’s real cash, bonus money, and loyalty points to play for. In all honesty, this is the closest you’ll get to instant gratification from an online promotional offer.

The last update of this promo was mid January, meaning this is very much a new promotion for the new year. Furthermore, there is no specific end date associated with Udder Madness, just like Bonkers Bingo. Therefore, you should have a lot of time left this month (and maybe even the next) to grab yourself a whole host of prizes. You’d better get milking that cash cow for all it’s worth!