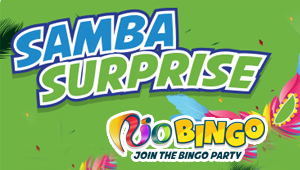 We’re into February now, finally, and so we can dust off the cobwebs and start to look forward to warmer months later down the line. Nevertheless, that waiting period could involve a lot of cold weather for many of us dotted around the globe, meaning we feel bluer than Blue Monday on the third week of January. A great way to combat this is to join in with the party spirit of Rio Bingo and its Samba Surprise bonus!

Pour yourself a tall drink and get ready for a daylong bingo extravaganza, dedicated to the much loved 75 ball bingo. Regarded as one of the most popular forms of the game across the world, especially in the States, 75 ball bingo is a great way to brighten up your day. Everyday will feel like a Rio party, thanks to this promotion starting from 10:15 in the morning until 11:15 at night. When the day first begins, the Samba Surprise activities will play every two hours, however once we get to 7:15pm, those games will speed up and play every hour. If you’re an avid bingo player, you’ll have likely experienced similar with the 80s Remix, Udder Madness, and other Cassava Enterprises bonuses currently active.

The beauty of having time between games is that you can grab yourselves several bingo tickets, ready for when it all kicks off. Despite this being the case, the number of tickets available will depend on the price of the tickets, a factor of this promo that changes every couple of hours. Also adding to the intense tempo of this bonus is the changing nature of the prizes – sometimes you’ll win real money rewards, while other times you’ll walk away with loyalty points and/or bonus cash. Prior to playing a game, you can view the prize to see if you want to join in with that particular round or not.

Visit Rio Bingo
For the occasions when more than one player wins, the prize of that activity will be split between all winners, therefore meaning that the prize size will be reduced, sometimes dramatically. However, while you may have to share a payout on occasion, whatever you win will be credited to your account the moment the bingo game ends. It’s a quick and simple way of engaging with the Rio Bingo community, and for adding a bit more cash to your money pile. Please note that bonus funds will be subject to a bingo bonus x4 wagering requirement. What is more, bonus money can’t be withdrawn in exchange for real money.

Ready to open up a world of daily surprises? Then go to the Samba Surprises page and start playing! Provided you’re a funded player, e.g. you use your own money to play bingo, you’ll be able to start immediately. It’s time to PARTY!