Pirates may have the monopoly on this hunting for treasure business, but when it comes to the gamers of Treasure Bingo, booty is never too far away. This tropical themed website has a lot of history behind it, as it changed hands in 2010 to be taken over by Ignite, the owners that now preside over this label. Despite this transition, the website has stood the tests of time well, with Dragonfish software and, subsequently, being part of the Dragonfish Bingo Network, having ensured continued success within the iGaming industry. What we’re keen to uncover though, is what has helped make Treasure Bingo such a talked about platform among gamers in the know.

As some of you will already be aware of, this site offers free bingo, therefore meaning that you don’t need to engage with any deposit bonuses if you don’t want to. However, we believe that part of the fun is in having rewards to interact with, as well as extra money to see you through the trials of the games, and so we look to the welcome package for its details.

When you’re new to the site, you can relish the spoils of a 300% deposit bonus, when depositing £5 or over, with the maximum bonus you can receive being a small but reasonable £60. This is by no means an out of this world offer, but it’s one that can lead to two more bonuses, if you choose to keep making real cash deposits; these other rewards come at 150% and 100%. Although this all means you start off on the right footing, it also means that you have three wagering requirements to overcome rather than one. However, fortunately for everyone concerned, these requirements are only x4 for the bonus and x4 for the deposit.

In reference to other promotions, there’s plenty there to get you in the mood to play some bingo, like Lucky £13K, a big money maker that’s a weekly deal held every Friday inside one of the bingo rooms. There’s other deals of a similar nature waiting to be found also, but for those who want a more luxurious experience, you can always join the Diamond Club. Although there’s no clear mention of this on the homepage, we know that this VIP scheme is in place, due to a VIP room being on offer. To join the ranks of this scheme, customers need to work towards the statuses listed, which involves earning points from playing as many of the activities as you can afford to.

When looking at the homepage, a screen that gives us little in the way of details, it can be all too easy to think that Treasure Bingo has little to offer in the way of games, but this couldn’t be further from the truth. You see, the website is ‘closed’ to non-members, leaving all those who’ve joined to see the numerous games in which they can join in, most of which are 90 and 75 ball bingo. However, the odd five line special is also thrown in, not forgetting that there’s scratchcards and slot machines available as well. Better still, the other casino options come from developers other than Dragonfish, such as NetEnt, Microgaming and Eyecon, therefore providing a more rich and colourful experience for users.

These two different types of games are separated from one another, with the bingo rooms having been designed to give a sense of community – when inside them, it’s like being in a physical bingo game with friends. What is more, just like when visiting your local bingo hall, tickets need to be purchased so that you can play the titles, unlike pokies which just demand an up front wager to get started.

The rooms you’ll come into contact with will have various names, most of which we’re not privy to, however what we do know is that there’s spaces for VIP players exclusively, free bingo halls to investigate, and guaranteed jackpot rooms for those highrollers among you. The fact that we’re not sure about the names of these rooms, simply adds a sort of enigmatic quality to Treasure Bingo, which seems fitting given its name.

Unlike with the rest of the site, information regarding services, such as banking, are well displayed and easy to find, therefore allowing visitors to get to grips with the rules. The banking system at Treasure Bingo is similar to other Ignite owned websites out there, in that there’s both credit/debit cards and ewallets to utilise, from providers like Visa, Mastercard and Paysafecard. Furthermore, that these methods will bank in EUR and GBP, and with no greater than a minimum requirement of £5 per transaction.

As we all know, deposits are typically a fast paced process, but what of the withdrawals? In this instance, we have to admit that the processing times are slower than we’d have liked, with wire transfer in particular taking up to 10 days. Nonetheless, while disappointing, this is due to the pending period that Treasure Bingo uses, to allow gamers to cancel their withdrawal within a 48 hour window. And so, by having the extra two days, customers are allowed the opportunity to change their minds.

Although Ignite own the site, it’s the operators, Cassava Enterprises, that have the licensing placed upon them, thus meaning that Treasure Bingo experiences the same regulations as them. Consequently, there’s a dual license from the UK Gambling Commission and the Government of Gibraltar.

Moving onto the support options of Treasure Bingo, we find that the information about these is as readily available as the banking details were, meaning that no confusion should be had over where to go and who to contact. That being said, there’s a little bit of confusion over the times of service, due to the operational hours changing depending on the day of the week (a table is provided to explain those hours in full). Typically though, services will run from 10am until 2am.

Live chat is found inside the bingo rooms, as a type of chat room setup, which we find a little off putting, while emails are your standard messaging system. As for calls, they are free for UK residence but will be peppered with tolls if you’re calling from any other jurisdictions, and so the customer support is not without its niggling issues.

From what we can see, which isn’t much, there’s no sign of social channels on display at TreasureBingo, however after conducting our own research, we found a Facebook page dedicated to the brand. Before you start celebrating, this page doesn’t appear to be very active, and so we have to wonder if you’ll be responded to if contacting the team through this social media channel. 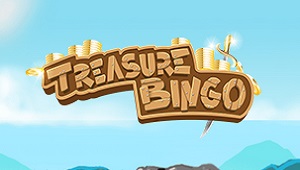