We don’t know about you, but when we hear the word ‘snappy’ we automatically think of crocodiles and other such creatures with strong, scary jaws. Makes sense, right? And yet Snappy Bingo didn’t bother with a theme that relates to this, but instead has given us a woodland themed interface to interact with. This design has been in place since its establishment in 2014, and so it seems that Snappy Bingo attempted to think outside of the box rather than conforming to it. Could this bode well for the rest of the site? If you go off of the fact that Cozy Games is involved with its development, as well as the site being part of the Live Bingo Network, it would certainly point to that. Another good sign is that there’s apparently over 50 activities to engage with, which is a higher number than what we normally see from Cozy Games.

Before we get into the various bonuses, we thought it would be worth noting from the off that there’s two types of loyalty schemes on offer from Snappy Bingo. After all, bonuses can end or become boring, but with constant rewards, there’s something to always look forward to.

The first offering we want to mention are the Bonus Bucks, a form of money unique to Snappy Bingo that can be used instead of your own money. Customers receive this for their continued dedication to the site, though they aren’t given on as regular basis as the loyalty points from playing the games. This brings us to our next loyalty based system, in which points are obtained from spending money and playing a wide array of titles; get at least 100 and you can convert them into money. The value of a point is 1p, but think of how much money you can make if you collect lots of them, why you could be on your way to becoming a highroller before too long.

As for promotions for newcomers, there’s a 300% deposit bonus for the first £10 you allocate, with your second and third allocations also coming with rewards, in the form of a 150% and 100% bonus. These come with a x4 bingo wagering requirement, but that’s quite a small amount in all honesty, and so the terms of this deal seem more than fair, as do the terms of the remaining bonuses. In reference to these, aside from the £3K bingo ticket offer, the rest are all aimed at existing users, with each of the offers based inside a specific bingo room and in relation to a set bingo format. What is more, on occasion there’ll be seasonal promotions that will be short lived, but promise healthy rewards.

The range of games you’re given by Snappy Bingo won’t be anything you haven’t already seen, unless you’re completely new to the iGaming scene, specifically that of the bingo community. However, you’ll be pleased with what you’re given, as not only are there bingo games but there’s also one armed bandits, table based games, Slingo and other such activities. In truth, the slots are in greater number than the bingo rooms, but that matters not, as both deliver good software thanks to NetEnt and Eyecon being involved.

Depending on what games you like, you’ll find yourself in different areas of the website, with the Bingo Lobby arguably the easiest to navigate due to its compact design. Despite there being eight rooms, everything has been neatly compiled into a table that can be interacted with in the form of prebuy tickets. You can also simply join a game that’s already started, for a just a couple of pence. These games deliver 90, 80 and 30 ball bingo, inside rooms called Hump Day, Big Ben and City Hall, as well as various others. All we’d tell you to watch out for, prior to joining a room, is that the size of the game prize is often much smaller than the rooms that offer grand jackpots.

As for the other activities, they too require you to be a registered member before use, though you’ll be able to see all the names of the games unlike with the Bingo Lobby. What is more, you’ll also be able to narrow down your search thanks to the categorisation of the slots into three sections: New, Popular, and Jackpot.

Although we often run into issues with banking, due to deposit methods not being the same as withdrawals, that doesn’t appear to be an issue with Snappy Bingo, as all types of payment are accepted for both. This means that you can bank with Visa, PayPal and Boku with peace of mind and in confidence, with your monies processed in EUR and GBP.

Another element of banking you can be confident in is the speed of the processing, which is a lot faster than online casinos we’ve reviewed previously. Normally, withdrawals can take up to 10 working days, and yet Snappy Bingo has withdrawals complete within just three. What is more, users can cancel withdrawals, that haven’t been completed, by using the flow back option. In keeping with this topic, there’s also the fact that no banking charges will be brought against you, unless the provider you’ve chosen decides to do so.

Should you be well versed in Cozy Games websites and labels, the mention of the upcoming regulators won’t be of any surprise to you; the UK Gambling Commission and the Government of Gibraltar are the governors of this website.

Before we get into how to contact support, let’s make it clear that contacting them is something that can be done no matter the time of day, thanks to assistance being available 24 hours a day, seven days a week. Furthermore, there’s also the FAQs and conditions to read through, should you wish to browse them before contacting anyone specific.

As for the means of speaking to the team, there’s live chat, email, and raising a ticket, three options which are ideal for those who don’t like physical conversations, whereas those who like hearing a voice can instead ring the contact number given. It’s all simple to understand, with you needing to be able to provide your registered email address in order for the team to help you efficiently.

We love it when we not only find social channels for an iGaming brand, but when they’re still active after several years of establishment; Snappy Bingo offers a Twitter and Facebook page for gamers to follow. These have been posted on by the team recently, with the last posts dating back to mid March, and so you can be rest easy that someone is on hand at the other end of these social channels. 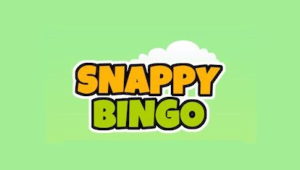