Virtually all of you will have heard of Robin Hood, as the legend of this British based lovable rogue has made its way into the hearts of many, at home and aboard. Although we can’t say with a definitive yes that this is the reason for Robin Hood Bingo’s name, we suspect it has played a part in its inclusion. Regardless of where this 2012 released site got its name, this is still a Dragonfish powered site, meaning that the brand has (and still does) garner a lot of interest from its peers and players. What is more, Cassava Enterprises, part of the 888 Group, act as the operators, which helps to further reinforce the prestige of this label. It could even be argued that these elements are the main reasons for Robin Hood Bingo’s continued success…

If you’re a lover of a good deal, Robin Hood Bingo is a platform that can gift you a string of good value bonuses, albeit via a small collection of promotions. You see, rather than showering you with unlimited possibilities, the creators of this brand have limited the number of bonuses available, with six accessible at this moment in time. Even though this amount will increase/decrease as each year passes, there’s certain bonuses that’ll never alter, like the welcome deposit bonus of 400%.

New users won’t need to deposit more than £10 unless they want to, with the 400% bonus given as soon as that money is credited to your account; with as much as £100 in extra funds available, this should start you down the right path. But before you get carried away, make sure to read about the x3 wagering requirement this bonus, and you, are subject to. If you’re up for more deposit bonuses, the second one for newbies is way more intriguing than the first, as the percentage is kept a mystery, with only the maximum amount of £50 revealed. The same minimum deposit of £10 is required, only this time when you take out the bonus, the rollover is set at x2.

Seeing as we’d like to leave some of the bonuses as a complete surprise, we now move onto the features of the Diamond Club, a form of membership that you’ll have likely seen before. There’s four tiers to work your way through, with the perks including that of regular cashbacks and speedier withdrawals and, if you’re already a Diamond Club member elsewhere, you’ll be able to fasttrack yourself at RobinHood Bingo. Should you not be part of this elite group just yet, you’ll need to play hard until an invite lands in your inbox if you ever intend to be.

Software: Dragonfish, NetEnt and Eyecon
When looking for bingo platforms, it can be difficult to know what more you need than the conventional 90 ball games, seeing as how this is the most popular form of bingo. However, when you join with this website, you soon realise you may have been missing out, as Robin Hood Bingo offers Swedish Bingo, 52 ball bingo, and 75 ball also. Unfortunately, we can’t tell you the names of any individual bingo rooms, as none seem to be available, or at least they aren’t to those not yet ready to play with real money. That being said, we are aware that there’s only four rooms in total, with the games played up until midnight most nights. What is more, some of the games deliver progressive jackpots for those lucky enough to win big.

Should you want to test out more of Dragonfish and their exceptional software, you can venture to the Slots section of the brand, which not only offers pokies but table games also. These come from NetEnt and Eyecon, with some of their most beloved titles part of the brief but reasonable list of activities. And while we’re sad to say that no free playthroughs are enabled, we’re happy to report that many of the activities have been specially designed with mobile gameplay in mind. A feature better demonstrated via the Mobile section of the label.

Once you’re ready to start playing with money, you can connect to your account through a range of payment options, like those offered by Mastercard, Entropay, and Neteller, if we’re to name but a few. Robin Hood Bingo delivers a much more varied range of payments than those seen from Jumpman Gaming controlled websites, and so we have to commend the operators for their forward thinking.

Another equally progressive feature is that five payment methods can be connected to any one account, with users able to bank in USD, GBP, and EUR. Of course, some providers may be restrictive with their table of accepted currencies, and so we advise doing research before committing to any one means of banking. Deposits start from as little as £5, while the withdrawal minimum amount isn’t easily found within the FAQs or terms. However, unlike that ‘hidden’ small piece of information, the times of processing are accessible, with most payment methods taking up to ten business days.

Not only is Robin Hood Bingo a registered trademark, but it’s also a brand that has a dual license from the Government of Gibraltar and the UK Gambling Commission, as stated within the About Us information.

Unlike with some labels out there that don’t provide user friendly navigation, this platform does, and in doing so provides a highly effective support system. Not only can you browse the FAQs of the site, but you can also gain access to a wide array of contact numbers, both for standard members and those classed as VIPs. Moreover, you can reset your password without contacting the team, as well as sending an email and/or submitting a query. The only dynamic we’re desperately missing is that of live chat, as it’s such a fast and convenient means of asking for assistance. As for when you can access any of the above, the team is on hand between the hours of 10am and 2am.

We love ending on a positive note, which Robin Hood Bingo has allowed us to do, thanks in large to their highly active social media page. Yes, sadly there’s only one social channel at this time, but fortunately it’s one that’s posted on regularly, even despite the Facebook page not being readily advertised by the Robin Hood Bingo website itself. Anyone who loves connecting with fellow gamers, or perhaps likes learning of surprise giveaways, will find this social media account invaluable. 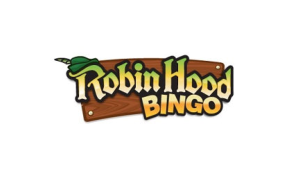