Rio de jaNeiro is a destination that always inspires a kind of party atmosphere that few other locations do, as such it makes sense that Cassava Enterprises chose this as the theme of their website. Established in 2014, Rio Bingo has been a vivid platform from which gamers have been able to party the day (and night) away via the bingo titles and slot machines, and yes, there’s plenty of the latter to play. Such games, both bingo based and beyond, have connections to Dragonfish software, as this is the main provider across the site, and so Rio Bingo is part of the Dragonfish Bingo Network.

Discovering the full details of the promotions of Rio Bingo is far from simple, due to the design of the website: instead of being open to all, only registered users will be able to see the site in all its glory. Frustrating though this may be, it does create an air of exclusivity about the label, therefore enticing potential gamers in.

Once inside the site, a welcome bonus of 300% can be found for all first time depositors, with an ask of £5 the only request made by the site in order for you to qualify. As you can see for yourselves, this is one of the more accessible types of deposit bonus online, as most ask for a minimum of £10 or over. Not that this offer is without terms, such as the wagering requirement, which while a low x4, is still a condition you need to meet before being able to withdraw any winnings. Following on from this, there’s also two other deposit bonuses, worth 150% and 100%, should you wish to earn even more cash, however if not, you can turn to the other rewards on offer.

Before you panic that the offerings are all aimed at newbies, this couldn’t be farther from the truth, as the £5 Street Party demonstrates, and so too does the 50% deposit bonus available upon every allocation of £10. And so, there’s always something for you to get stuck into, like that of the VIP club, known as the Diamond Club; if you’ve played with Cassava Enterprises before, you’ll have likely heard of this membership previously. To achieve the ultimate ranking of Diamond status, you need to collect points, aka diamonds, as you play in order to go from one level to the next.

As we mentioned before, this is a site that’s chiefly operated by Dragonfish and so that’s one of the main providers you’ll come into contact with. However, it’s not the only brand involved, as the slots will highlight if you should investigate them; once you’re playing those titles, you’ll find activities from NetEnt and Eyecon, two such labels that are a substantial catalog of games for you to choose from.

But for now, let’s look at the bingo rooms, seeing as how this is likely why you’ve joined a bingo platform rather than a casino one; inside the lobby you’ll find rooms such as Hello Rio, the VIP Room and a Free Bingo Room, in addition to various others. These hubs in which you can play will cater to 90, 70 and 5 line bingo, thus ensuring that the selection received is diverse. Sadly however, we can’t tell you much more than this, seeing as the interface locks us out of the rooms unless we have membership, which we do not. That being said, we can assure you that the tickets for these games will be cheap, sometimes as low as 1p per game.

In regards to the pokies, well these aren’t housed in rooms, but are split into categories for ease of use. Furthermore, they don’t require tickets for you to play, simply old fashioned real cash. This is true also when it comes to the mini games housed at Rio Bingo, yet just another layer of the entertainment value yet to be observed and savoured.

Should you still be with us and keen to get started, you’ll want to look at the Banking page that Rio Bingo delivers, a pop up window that has no end of information there for you to digest. As you’ll be able to see, there’s a large volume of options for payments, including over the phone, Visa, PayPal and Neteller, with these options allowing EUR and GBP as the accepted currencies.

Moving onto the policies of banking, aka deposits and withdrawals, a minimum of £5 is needed when making either of these two transactions, with much of the information now differing between the two processes. Take withdrawals as an indicator of this, it’s a much more lengthy process, with some payments needing eight business days in order to finalise, as well as the process being limited to 10 transactions per day. These are small differences between the two, but they still need to be realised prior to attempting any form of banking, if for nothing else other than avoiding problems further down the line.

From banking we move onto licensing, another integral part of the Rio Bingo experience, albeit for contrasting reasons. This site has two licenses to regulate its services, coming from the Government of Gibraltar and the UK Gambling Commission, with the details of each found upon the website.

In spite of all the necessary information being presented upon numerous pages of this site, that isn’t to say that users won’t run into issues. As such, we’d advise utilising the FAQs and/or the Contact Us page, with the latter leading to the options of email, telephone and live chat support. However, while customers can live chat with the team, they’ll need to enter into the bingo rooms that offer this feature in order to do so, a feature we find a little fiddly.

Another potential hurdle for anyone to overcome is that the services only operate between 10am and 2am, with these hours referring to UK time and not any others. What is more, the UK phone line is free of tolls, yet international ones will apply charges, yet another aspect that seems unfair for users concerned.

When it comes to social media, an element of iGaming that has grown over recent years, we find Rio Bingo to be lacking in that department, and this is even when we move from the site and search independently. Why this is, we couldn’t say nor do we want to speculate, however it certainly makes Rio Bingo seem more dated than it did before, a characteristic few websites want associated with them. 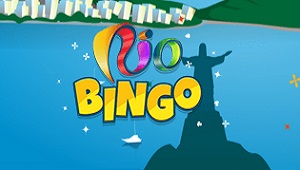 Get 120 bingo tickets on your first deposit, and play for a £1500 daily prize pool!
PLAY