Giants are the stuff of fairy tales and legends, with some seen as scary monsters to be vanquished, while other times they’re our larger than life friends. Fortunately when it comes to the giant of Giant Bingo, the character we’re introduced to is a friendly guy, who is there to assist you on your journey. It may sound cheesy, but this novelty themed brand has successfully been using their Finn the giant mascot since 2016, and so we have to conclude that customers love a fun theme when they see one. Brightly decorated with cartoon features and imagery, this is a website that has lots of personality, and is said to have bingo games to match it.

Even though the interface can be distracting, especially as Finn takes up so much of it, there’s far more to look at than the aesthetics, like the promos for example. Although they’re not great in number, they give registered users a means of improving their account balances, and sometimes bagging exclusive deals. You only need to look at the new players deposit bonuses to see that.

The thing is, while the first deposit bonus of 300% is visible, the others remain hidden until you become part of the Giant Bingo family. This presents problems in itself, but for now we’re going to bypass them and look to the terms of the welcome package. First of all, only a fee of £5 is needed for players to qualify, a sum of money lower than what we typically tend to see from other labels. What is more, the rollover necessities are also kept minimal, with users having to overcome a x8 wagering term (x4 for the bonus money and x4 for your deposit). As we then move on and activate the following two newbie offers, we find that while the value of the promo has changed, the conditions remain the same.

Now that you’re a fully fledged member, more options open up to you, with the Diamond Club being one of the main avenues to go down. This isn’t a promotion as such, but rather a loyalty scheme designed to give you more bang for your buck. As Giant Bingo is part of the Cassava Enterprises company, you may have already activated this type of VIP scheme with another site of theirs.

If that’s the case, you’ll know the ropes, but just in case you don’t, the system is based on collecting diamonds. These diamonds come from the money you wager, with more of the twinkling gemstones given to you the higher your threshold for gambling money; if you stake the top amount of funds, you’ll be granted access to Platinum Level membership.

Most of the titles you’ll play here are from Dragonfish and them alone, with few exceptions to this rule to be found. However, in spite of there only being one main developer involved, the games we’re given are of good quality and play well. In regards to the types of activities you can play, in addition to the numerous bingo rooms of Giant Bingo, you also have penny slots, table based games, and instant wins.

The more classic casino options are played outside of rooms, while the bingo ones are subject to their own special type of network. As for the bingo rooms themselves, we know that they offer five line bingo, freeplay bingo, and 90 and 75 ball options, but we’re not actually told the names of the rooms unless we deposit money and play. We guess that’s a small price to pay, considering how varied the number of rooms are.

Of course, the biggest boon to all of these options is the fact that popular games will be featured at the top of the games lobby to help those of you less experienced to find the types of activities best suited to general players. It isn’t a perfect system, but it’s a good place to start if you’re in the dark about iGaming.

Despite what some reviews will tell you, the minimum amount for both deposits and withdrawals is £5 each, as the banking information from Giant Bingo states. What is more, there’s a brief table of payment options for customers to browse prior to allocating/removing any funds, courtesy of a specialised banking section. As you’ll be able to see for yourselves, Visa, Neteller and Skrill are among the methods accepted.

In terms of currencies, it would appear that EUR and GBP are the main ones allowed, which is standard for many online bingo sites. Moving onto withdrawal timeframes, each method has a different processing speed, however most take at least seven days. Moreover, there’s a 48 hour pending period for withdrawals before they’re even taken to processing; this is for any sum of money, even the maximum amount of £3,000 per month.

As this is Giant Bingo, it makes sense that the licenses enabled are from regulating giants; in this instance, it’s the Government of Gibraltar and the UK Gambling Commission who have lended their licensing to this brand.

When you read up on support options, Giant Bingo assures its users that there’s a live chat option, or at least something very similar, and yet it isn’t a method we find easily accessible. Therefore, we’d suggest that gamers are best using email and/or phone options for all major enquiries, with the FAQs then used for smaller questions/concerns. Everything we’ve discussed in this section is available 24 hours a day.

Even though we thoroughly took our time in search of any social media channels, we couldn’t find any mention of them on the Giant Bingo homepage, or anywhere else for that matter. This is most curious, considering how contemporary this label is, but nonetheless that’s what we’re left with. As a result, we’d suggest you utilise the social channels of the operators and software provider if you’re keen to get social updates to your apps. 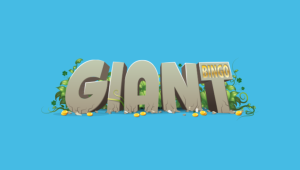