The white feathers of doves will be blinding you as you play with Dove Bingo, a 2015 established iGaming label from the respected company of Jumpman Gaming. This aesthetically pleasing interface not only looks the part of contemporary games hub, but it also provides freeplay bingo for those looking for entertainment without the steep price tag. To make the experience that little bit more enjoyable, we can also confirmed that Jumpman Gaming is part of the 15 Network, a bingo group that’s regarded as the creme de la creme of bingo websites. And so, when we visit such a page, we have more hope than worries, and are therefore most eager to get started.

Unlike with some of the other Jumpman Gaming sites, which have sadly been short of offers, Dove Bingo has quite a few of them to introduce us to. Consequently, we look from the newbie bonuses to the existing customer deals, just to make sure that what we’re seeing isn’t some kind of illusion. It’s not. This is the real deal.

Speaking of deals, all newcomers will receive a spin of the Super Spins wheel when making a deposit of £10, with all wins subject to a x40 wagering requirement. Sometimes you can bag yourselves hundreds of free games on the pokies, while other time you walk away with nothing but the clothes on your back. Not that this is the only bonus to activate, as there’s also the Newbies Free Bingo, an offer that lasts 31 days after you make your first real money wager. This is where you can play the free bingo games, yet score real cash prizes.

When promos like the ones mentioned, and that of Monday Madness and Tuesday Treasure, just don’t cut it anymore, gamers can look to the VIP membership to satisfy their lust for rewards. In contrast to some of its sister sites, Dove Bingo actually thoroughly details the VIP scheme, with us able to see that five levels of membership are involved. Moreover, that the higher the status of your membership, the more free spins you receive, not forgetting that there’s also an array of exclusive prizes waiting for you.

If you enter into the Bingo lobby without being a member, all you’ll receive is a page of information detailing how the different forms of bingo work. As this is Dove Bingo, a label that only provides 90 and 75 ball bingo, they are the only forms of the game you’ll have access to when visiting the bingo rooms. Even though these may not appear to visitors, those who join will find that The Snug and Free Bingo are two of the options open to all those who pay to play.

Should you wish to play software other than that of Jumpman Gaming, it’s worth looking at the online pokies that Dove Bingo provides, as they showcase brands such as Eyecon. Sadly however, while the titles of such labels are included, there’s not that many of them, with the range of activities classed as measly at best. In an industry that’s all about diversity, Dove Bingo seemingly falls short.

Despite this being the case, the entertainment value of the titles is mostly good, with a decent mix of themes on offer for saying how niche the selection of games actually is. Besides, as this is primarily a domain used for bingo gameplay, it makes sense that there’s less slots than bingo games, otherwise it wouldn’t make much sense to the branding of the label.

Those of you who sign into PayPal and Skrill to make your iGaming transactions are above to receive a rather sharp kick in the teeth, as Dove Bingo doesn’t cater to such payments. Instead of offering a varied collection of methods, this label has chosen to stick with main credit/debit card names, such as Visa, Mastercard and Solo. Seeing as most users have a credit or debit card, no one should hit any major hurdles however, that doesn’t take away from the inconvenience of the lack of diversity given.

As for the details of the transactions, deposits are the faster and cheapest to action, with £5 for each allocation needed (unless you’re activating a reload deposit bonus). In regards to withdrawals however, they has a higher ask of £30, with a timeframe more ambiguous than accurate. You see, unlike with deposits, withdrawals take several days to clear, with each method adhering to its own terms and conditions. As a result, it can take 14 days before the money is in your bank account. Please also note that the currencies permitted are EUR and GBP.

To give you peace of mind as you play, Dove Bingo has a dual license activated at this time, and has done since its release. The regulations that it follows come from the governing bodies of the UK Gambling Commission and the Alderney Gambling Control Commission.

One area of Dove Bingo that we need to address, more so than some of the others, is the customer service. Not because it’s bad per say, but due to the fact that it only operates Monday to Friday, 9:30am until 6pm; this is too short a window to give users. Weekends happen to be some of the busiest days for games sites, as it tends to be when most users are active as they’re off work. To then have no support coverage makes little sense when aiming for the the widest target audience possible.

Nevertheless, as we can’t do anything about this poor decision, all we can do is point you in the direction of the options available during working hours. These include live chat, WhatsApp calls, email and Facebook.

Dove Bingo has an active Facebook page, as you may have gathered going off of what we said minutes ago in the support section of this review. Most of the time it’s used as means of gaining new insight into promotions and other such deals, but it can also be used to gain assistance. 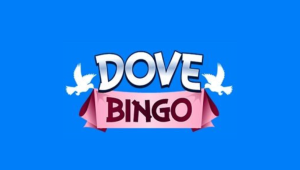 FREE spin of the ‘Mega Wheel’ when you make your first deposit - win amazing prizes including Amazon vouchers and 500 Free Spins on Fluffy Favourites! All new players will automatically qualify for at least 1% Daily Cashback
Play