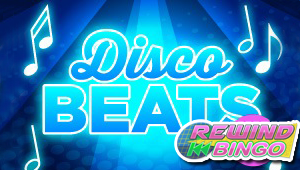 We hope you like to boogey, because Rewind Bingo’s latest release will make you dance your way all the way back to the 1980’s with Disco Beats. This groovy bonus promises a 75 GBP iTunes gift card for all your disco needs – or you can be boring and take the cash prize equivalent, instead. This bonus is a show of loyalty to existing players, as only funded players may participate. Cards are 1 penny each, so make sure to stock up, and start praying you will be the one that gets drawn for this fabulous prize.

A single card draw game takes place every Saturday at 8 PM. It is only available to gamblers who previously made a deposit on this website and are older than 18, with card prices being one penny. You can purchase up to 96 tickets to increase your chances of being drawn as the winner. You can play this on both desktop and mobile devices alike.

The end goal is to get your numbers drawn from the pool. In case of multiple winners, the prize will be evenly split between all the gamblers who have won. Said people will be contacted through their account messages sometime during the 5 day period from when they have won. If the prize is not claimed within three weeks, everything you have won is considered forfeited. In case the 75 GBP iTunes gift card is not your thing, you can request to be granted a regular 75 GBP cash prize instead.

If you want to play, you will have to be a funded player, first and foremost. To do that, you will need to make a deposit. Both the minimum deposit and withdrawal are 5 GBP. You cannot make the deposit after the Disco Beats bonus has already begun, so make sure you are not running late, or else you will have to wait until next week.

The bonus will continue to be played on Saturday at 8 PM until further notice. There is no signs pointing to the fact it will end any time soon, but Rewind Bingo does reserve the right to change or outright cancel any promotion, bonus or special offer at any time. Individual players are tracked by IP to make sure only one gambler is participating in the bingo games. Only one person per IP is allowed to play on any of the websites that share the same bingo network.