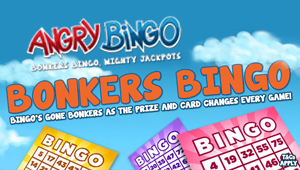 Angry Bingo players are in for a treat with one of the latest promotions from the brand; Bonkers Bingo is a 75 ball promotion available to all registered users. Red, the mascot of the site, has completely blown his stack and has whipped himself up into a frenzy. Every game played during the times stated by the promotion will gift players different prizes, but also different ticket prices as well. Bonkers is definitely a great way of describing the unpredictability of this fun little bonus.

As you’d expect with any promotional material, players need to be funded in order to play, e.g. they must be using real cash to access the games – those of you relying on free bingo are going to get left behind. The games take place throughout the day, everyday, between the hours of 9:15am until 11:45pm; each new game plays on the hour every hour until 5:15pm, which is when the games become more frequent and start every half an hour instead. It’s a fast paced promo, designed to get you as hot under the collar as Red himself!

Prizes are said to be a mix of bonus cash, real money, and Angry Bingo Points – all three of these payouts have their advantages. As far as we’re aware, the diamonds you collect in order to progress up the tiers of the Diamond Club are still active, meaning every time you deposit a set amount, you have the potential to climb to new levels.

Visit Angry Bingo
Moving onto the price of the games, ticket prices will fluctuate between costing you 0p all the way up to 5p; we think you’ll agree that even the top ticket fee is more than reasonable. If the cards are priced 1p or over, a single user can purchase up to 96 cards in a row, however if the price of a ticket is 0p, only up to six tickets can be bought. Due to the flexibility of the promotion, we can’t guarantee that the prizes are better the more you pay out. Nonetheless, what we can confirm is that prizes will be shared between players, in the event that multiple winners occur.

Due to the high speeds of Red’s Bonkers Bingo, any prizes won will be automatically gifted to you at the end of each game. There’s no hanging around here, just instant gratification, making this ideal for those of you who prefer quick fixes to the long game prize draws that Angry Bingo sometimes hold.

At this moment in time, there’s no end date attached to this bonus, however as stated by the general bonus terms, Angry Bingo can terminate a promotion whenever they choose. Consequently, while there’s no need to jump onto this special quickly, it’s worth trying it out sooner rather than later, just in case Red suddenly cools off and removes this unique bingo bonus.