For the Love of Bingo; Fun Facts About Bingo Daubers 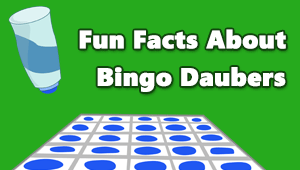 When it comes to bingo, daubers are an integral part of its gameplay, or at least they have been for many years. Since the birth of online bingo, daubers have taken a slight backset in their involvement, though not by much. However, while daubers may be more obsolete for online players, those satisfying colourful markers are still a recognisable part of the bingo community. Whether you pronounce it dabbers or daubers, these “pens” have been the chief way of marking off the bingo calls that match your bingo ticket. But where did these tools come from, and why have we fallen in love with them in such a unique way?

To learn more about these bingo essentials, we need to go back to when daubers were first introduced into the game. Moreover, we need to look at all sides of dabber uses, which means that we’ll be uncovering some fun facts about what makes these pens such a joy to use when playing. They’re part of the tangible experience, one which has shaped bingo since it first came to bingo halls in the 1930s.

The History of Bingo Daubers

The “birth” of daubers, so to speak, came about as a practical solution to a tedious problem; when bingo first came onto the scene, beans/counters were used to mark off the numbers you had. The only problem was that one slight knock of the table, and countless players lost the lines they’d started to form.

As you’d expect, many solutions for this was sought, including tickets that has a window like opening, to help make it clearer when a player had matched with a bingo call. Nevertheless, while windowed cards and plastic sliders helped with the issue in some ways, there was always the risk of the tickets being accidentally altered in some way. Consequently, in the latter end of the 20th century, bingo dabbers were developed in order to stop such mishaps from happening. Due to the nature of daubers, in that they’re ink based, there’s no risk of counters sliding off of the cards, or windows being accidentally opened or closed; it’s a more hassle free, and stress free way to play.

From these origins, daubers have become an icon of the game, with daubers now coming in all shapes, sizes and colours to help players customise their experience. Such a simple action, to colour the numbers, and yet it has become the epicentre of gameplay.

1. What’s inside a bingo dauber?

As surprising as it may be for some of you, a lot of non-gamers have no idea what a dauber is, let alone what’s inside of it. To remedy that, we took a closer look at the markers in order to discover what makes them tick, or ink in this instance. Filled with ink, these pens have a sponge like end that floods with colour when pressed onto a paper surface, therefore releasing the ink onto the ticket and colouring in a number. At least 40ml of colour is inside a dauber, though more expensive daubers offering a higher volume of ink, thus allowing for longer periods between refills.

It might intrigue you to learn that there’s a number of different inks that can be placed inside of dabbers, and so checking its toxicity may not sound as strange as you might think. After all, bingo is a multigenerational game, with play for fun options available for children, and so no toxicity is a must for a lot of players. Nowadays the ink inside of daubers isn’t toxic, regardless of whether standard or fluorescent ink is used, however we advise you always check before playing, just in case. We doubt you’ll find anything inside of them to transform you into a superhero, but you can never be too careful, or lucky, if you should want to be the next Spiderman…

3. Is the Ink Inside Bingo Daubers Permanent?

Given the fact that ink is inside of these markers, it stands to reason that the ink used is somewhat permanent: if you dab your paper, it’ll mark. Nonetheless, this isn’t to say that the ink will damage your clothes – though why you’d want to cover your clothes in dauber ink, we just don’t know. What is more, it’s likely that if you used a special eraser, the type for ink specifically, you’d probably be able to remove most of the colour. But why go to all that trouble? Just make sure you’re dabbing the right numbers, and you’ll be just fine.

4. How to Remove Dauber Ink?

Okay, so the worst has happened and you’ve got dauber ink on your skin, your clothes, your hair – everywhere! What are you to do? Well, fortunately for you, there’s no idea of tips on how to remove the stain, with soap being the most logically of choices when the ink is on skin. However, due to how strong the ink can be, it may require more substantial substances, such as tea tree oil. And as for your clothes, a mix of baking soda is always a sure fire way of getting that mark removed.

5. Can You get Different Bingo Daubers?

The short answer is yes. Bingo daubers have evolved into quite the accessory, and so it stands to reason that there’s no end of ways to make your dauber stand out from the rest. Not only can players have brighter colours, thanks to fluorescent ink, you can also purchase glitter based daubers, just in case you want to truly sparkle as you play. There’s so much choice that bingo daubers can truly mirror the type of personality you have when playing, so make sure to tailor yours to you.

6. What’s the most Popular Dauber Colour?

Just like with anything that offers variety, there’ll always be a favourite among its users, with bingo daubers proving to be no difference. According to countless surveys, the most popular colour among bingo players is purple. Nobody actually knows why this is, but for whatever the reason, you’ll always see a sea of purple coloured numbers whenever you play inside a bingo hall. Is it a conspiracy? You decide.

7. Are Daubers just for Bingo?

No. There, we’re done. All teasing aside, bingo daubers have found there way into many situations since their creation, with the most common being that of creative based activities. Art projects, teachers, etc can all find a purpose for these inky pens, with some users even using the things to dye their own hair, and so a dauber isn’t just for bingo, it can be for life also. And best of all, you don’t have to feed it or walk if for it to stay happy!

Seeing as how daubers are such an intrinsic part of the bingo experience, when bingo first moved online, many feared they’d lose out on their beloved daubers. Luckily however, that wasn’t to be the case. Although the dauber you use online is only a virtual one, players can still pick their colours to ensure a more tactile playthrough. What is more, some games of bingo will even like you AutoDaub, which basically takes out the hard work, leaving the card to mark off the matching numbers for you. Coupled with this, you also have some online players who choose to play both with a virtual card and a physical one they whipped together themselves. It’s a lot more work and multitasking, but for some, it ensures that you get the best of both worlds, and that you don’t lose out on the satisfying dauber marking.

Are online daubers the same as physical ones? No, they’re not nearly as textured or as hands on, however they’re still involved in the crucial part of the gaming process, and so online bingo would be lost without them. Of course, if you’re a sucker for bingo daubers and need to use a physical version of them, then bingo halls are the way to go for you.

Is it Dabbers, Daubers or Dobbers?

This is the age old question that has dogged bingo plays since daubers came into existence, much like when people from the UK argue over whether a certain baked good is a cob or a bap. Much like that heated debate, the daubers, dabbers or dobbers one has much the same response: it’s whatever feels most natural to you.

When reading up on bingo, you’ll find that the most common spelling is daubers, with dabbers being the second most common, however any one of those three can be used. In fact, we’re sure there’s even more regional terms for daubers if we looked into the debate further. The point isn’t what we call them, but rather how we use them to enjoy the game, so whether you daub or dab, just make sure you’re having a good time when doing it.

When all is said and done, daubers are the beating heart of bingo, be that online or offline, be you a purple dauber kind of person or a red one. Moreover, when it comes to daubers and their origins, there’s a lot more to them than meets the eye, which again adds yet another layer to the history of bingo.

Now that you know everything there is to know about daubers (within reason), maybe it’s time you find yourself a game to play, and put those dabbers to use? Who knows, the dauber you use this time round could be your lucky charm for that game.